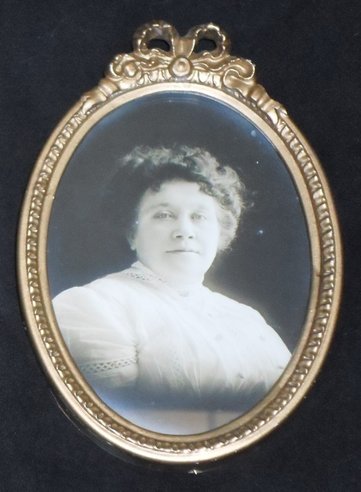 The first child born to John and Bridget Silk was Mary Agnes Silk.  She was born on March 1, 1858, in Beech Hill.  She was baptized the next day and her godparents were Thomas and Catherine Silk.   It is not known how they were related.  Nothing is known of her early life.  She did not have a formal education but later US Census records show that she could read and write.

It is not exactly clear what prompted Mary to immigrate to San Francisco with her brother Patrick.  They listed 1880 as their immigration year on the 1900 US Census, but exactly when or on what ship they came to America is unknown.  The year 1880 was the beginning of a great deal of immigration from all over Europe.  There was a long period of economic depression beginning in 1873 and running through 1879 or 1896, depending on how the depression is measured.  It was known as the Great Depression before the Depression of 1929-1941 took the name.  Now it is generally known as the Long Depression.  In Ireland, the Long Depression coincided with another round of Famine and political unrest surrounding reforming the Land Laws.  It is likely the combination of these issues spurred Mary and Patrick to seek a better situation.  The reason for coming to San Francisco was that their maternal uncle, William H Molloy had come to Boston in 1870 and, about 1880, had migrated across to San Francisco.

Mary and Patrick appear for the first time in San Francisco’s Langley Directory in 1882.  They lived with their Uncle William at 510 Mission Street, in the South of Market area, where many Irish immigrants settles.  Mary was working as a seamstress, and Patrick was a laborer.  Some time after coming to the City, Mary met and married William Cogan. 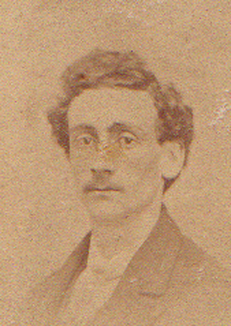 William was born in St. Louis, Missouri, to an immigrant laborer named Thomas Cogan.  Not much is known about his mother, other than her name was Mary, she was born in Ireland in 1841, and she died on May 9, 1886, in San Francisco.  (Thomas Cogan married another Mary that died in 1903 and is buried in Holy Cross.)  He was oldest of six children.  He was 11 years older than his next sibling, Mary.  Whether he had other siblings between who died is unknown.  It is also unknown when his parents brought him to San Francisco.  St. Louis was a Union city and supply depot during the Civil War, but loyalties were divided in the mostly-neutral state.  There was a major riot on May 11, 1861, when the Fifth Regiment of Missouri Volunteers, a mostly German immigrant company from the 10th Ward, was attacked by a mob.  Shots were exchanged and six men were killed.  How long the Cogans enduring in St Louis in unknown, but it seems that William’s father took the family to New Jersey and joined the 2nd New Jersey Cavalry.  (In 1900, Thomas Cogan was awarded a military pension for his service.)  William did not see his father from age four to age eight.  Sometime after the War, the family moved to San Francisco where William’s sister Mary was born in 1868.  This would have been before the Transcontinental Railroad was finished.  The family must have come across by wagon train. 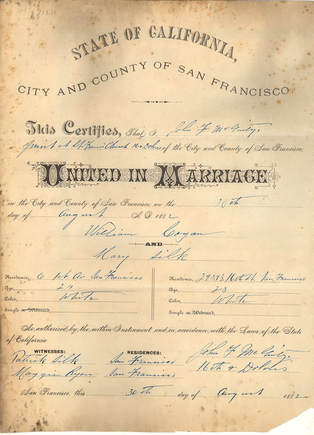 When they met, William may have been a laborer for L. Sloss and Co., but, by 1883, he was working as a driver (“expressman”) for the City Railroad at 5th and Bryant.  According to the 1898 California Great Register of Voters, he was only 5’4”, he had dark hair and blue eyes, and he had a florid complexion.  They were married on August 30, 1882, at Mission Dolores Church by Fr. John F. McGinty.  The witnesses were Maggie Ryan and Mary’s brother Patrick.  Their marriage license shows that Mary was living at 2939 ½ - 16th Street, near Mission, which is why they married at Mission Dolores.  William was living  down at First and Market.

For the first ten years of their married life together, the Cogans moved around the Mission District as their family began to grow.  Their first child Carolyn Margaret (Carrie) was born a little over sa year after their marriage.  At the time, they lived at 1910 Mission at 15th Street.  In 1884, they moved to 1316 Mission Street, where John Patrick was born.  In 1887, they moved to 82 West Mission and lived there for five years while Isabel Mary and Irene Catherine were born.  In 1892, they moved to the Mission District into a house on Harrison and 23rd where William Joseph was born.  In 1898, they moved to 122 Jersey Street in St. James’ Parish.  Their last child, Hazel Josephine, was born there.  They seem to have settled in, and they lived there for a decade.

St. James’ was in the developing neighborhood of Noe Valley.  The streets in the neighborhood had been laid out by a Mormon named John Meirs Horner, and the area is still referred to as Horner’s Addition on tax rolls.  Horner named Jersey Street after the state where he was born.  As a working-class neighborhood, Noe Valley houses were built in rows, with some of the efficient, low-cost Victorian and Edwardian homes being more ornate than others, depending on the owner's taste and finances.  They would rent the house on Jersey street for the next nine years.

The house on Jersey Street was only a few blocks from where Mary’s younger brother Michael had a house on 25th Street.  It was likely at this time that William joined Mission Council No. 3 of the YMI with his brother-in-law Patrick.   Mary does not seem to have joined any fraternal organizations like her sister-in-law Ellen had.

In 1903, Mary lost her beloved brother Patrick to pneumonia.  She must have been devastated.  Two versions of his obituary are the only obituaries pasted into her family Bible.  By the time Patrick’s wife died in 1910, she herself was a widow and single mother of six.  She was in no position to take in any of Patrick’s orphaned children, though she undoubtedly would have wanted to do so. 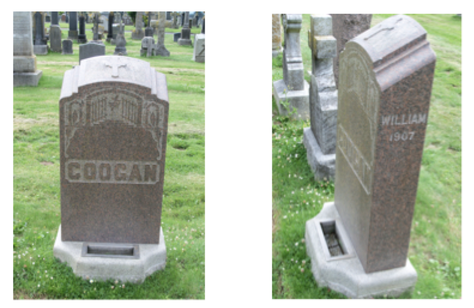 On April 24, 1907, William Cogan died of liver failure.  He was 50 years old.  There was a requiem mass at St. James’ Church followed by the burial in Section T of Holy Cross Cemetery in Colma.  Though his name had always been spelled Cogan, the name on the tombstone was spelled Coogan.  In subsequent City Directories, Mary switched back and forth between Cogan and Coogan.  Why the change is unknown, but, by 1920, all the children had settled on Coogan.  Mary never remarried and was a widow for the next 25 years.  Three of his four daughters married men named William.

It is likely that Mary received some insurance money from the Ancient Order of United Workmen (AOUW), a fraternal order that provided social and financial support to its members.  William had joined Harmony Lodge No 9 somewhere along the way, and, according to a Chronicle article, he had been a Past Grand Master of the lodge.  The AOUW was the first of the "fraternal benefit societies", an organization that would offer insurance as well as sickness, accident, death and burial policies.  It would evolve into the Pioneer Mutual Life Insurance Company and it still exists today as part of OneAmerica.

After William’s death, Mary moved the family again, this time to 907 22nd Street where she got along by taking in boarders.  Unlike running a boarding house as her sister-in-law Ellen had, taking in one or two lodgers meant that the family would be less cramped, but the women of the house would have to serve as cooks and cleaners.  In 1910, one of those boarders was Frank Tibbitts, who would later marry Mary’s daughter, Carrie.

In 1910, Carrie bought a cabin in Boyes Hot Springs, near Agua Caliente in Sonoma.  Mary spent summers there enjoying the summer warmth.  Her brother Mike had a cabin nearby and her sister Delia moved up there later.  Delia’s grandson Frank described Agua Caliente as being like an Irish townland, with separate houses, plenty of open land and fresh air, and lots of Irishmen all around.  The houses all had rose gardens out front, with picket or split rail fences instead of the ubiquitous stonewalls of Ireland.  Mary and her mother and siblings must have felt more at home than they had in years. 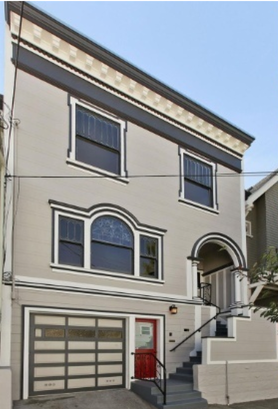 In 1912, a new Catholic church opened in the neighborhood, and the family became a cornerstone of St. Philip’s Parish.  Four of Mary’s children were married there, and several of her grandchildren were baptized at the new church.  Mary would even be buried from there.

Also in 1912, Mary welcomed the first of her five grandchildren, William Anthony Flynn.  Three years later, Billy was joined by a brother, Raymond Mark.  In 1917, Mary had two granddaughters, Blanche Margaret Gallagher and Marion Norberta Ellison.  Her final grandchild, William Ellison, Jr., was born in 1919.  The same year that her granddaughters were born, the Flynns became renters in the house on 23rd Street.  With Isabelle, Bill and their two, Bill and Eda and their daughter, and Hazel and Mary, the house was full and vibrantly alive.  In 1920, Bill and Eda had moved out of Mary’s house, but Hazel stayed until she married in 1929.  The joy of grandchildren was balanced by some loss, though.  In July of 1916, Mary’s mother died. 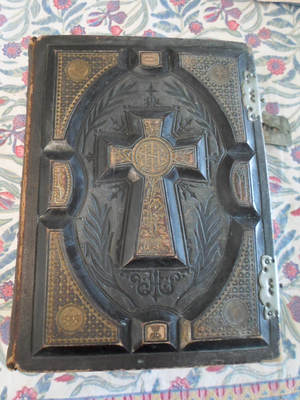 All the big events—births, marriages, death, etc.—in the Coogans’ lives were recorded in the Family Bible.  The Bible was passed to Isabel, who passed it on to Hazel to maintain.  After Hazel died, it went to Sr. Toni Lynn Gallagher, who passed it on to Kevin Quattrin.  Besides the names and dated of main events, there were the wedding certificates for Mary and William Cogan and Carrie and Frank Tibbits, numerous mass cards (including Bridget’ Molloy’s right next to John F. Kennedy’s), and assorted obituaries clipped from the newspapers.  Inserted into some pages were dried flowers.  Unfortunately, it is unknown whether the flowers or the passages thus marked were significant or how and to whom they were significant.

Mary endured another tragedy in 1928 when her son John Patrick died.  The sorrow was compounded by the cause of death:  strychnine poisoning.  The shadow of a possible suicide cast an even darker pall over a dark time for Mary.   Toni Lynn remembered, “Of course, the Church was pretty hard on the person in those days, and, unless you had a pastoral parish priest, there were unmarked and unconsecrated graves.” 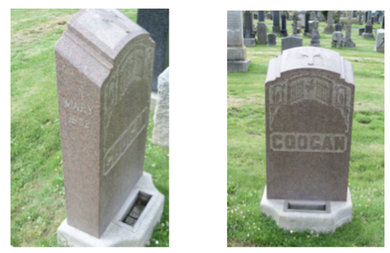 After John’s death, Mary seemed to become more weary.  By 1930, she had signed the house over to Isabel and Bill Flynn.  The Flynns continued to live there through the 1970s.  Mary continued to take in a border or two to maintain financial stability, but Bill ran Isabel ran the house.

On July 12, 1932, Mary passed away from a cerebral hemorrhage.  She was 74 years old.  A rosary was held on Thursday night at Halsted Mortuary and, after a requiem mass at St. Phillip’s Church Friday morning, Mary was buried with her husband at Holy Cross Cemetery.

Mary, along with her brother Patrick, was the point person for the immigration of the Silk family.  After her mother died in 1916, she became the matriarch of the family for the next 16 years.  She raised her children to be strong, faithful, and responsible.  She taught them to cling together and rely on one another through all the difficult times in their lives.  Her resolve made the Coogan family capable of sticking together through thick and thin, always supporting one another and aiding each in the achievement of the American Dream. 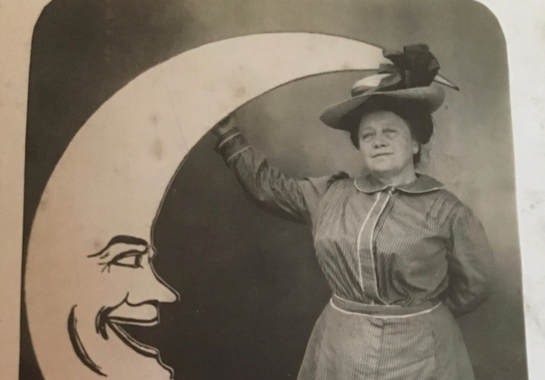