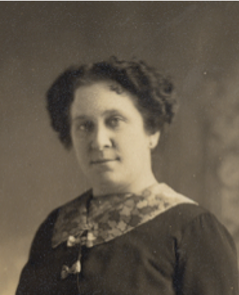 There are conflicting records for the birth of the youngest Silk child, Catherine Frances.  Baptismal records show her birth as April 5, 1875.  The Civil birth record shows it as April 19, 1976 and the California Death Index shows it as April 21, 1880.  The baptismal record is most likely correct and matches her age on the ship’s manifest when the family came to America.  She was baptized at Bullaun Church on April 17, 1875, and her godparents were Mary Moran and Edmund Duffy.  She was eight years old when she came to America.  Like her sisters, she had no formal education but could read and write and her mother taught her all the (then) necessary domestic skills.  She lived with her mother (sometimes with Patrick, sometimes with Jim, sometimes with Mary) over the next 16 years.  Somewhere along the way, she met John Leonard.

John Joseph Leonard had been born to James and Elizabeth Leonard on July 17, 1868, in Roscommon.  He was the oldest of four children and his siblings Michael, Elizabeth, and Joseph had followed him to San Francisco.  It is uncertain how Kate and John met, but John attended Patrick and Ellen’s 10th Anniversary party in 1897, so Kate may have met him there, or he might have been invited because they were dating.   In 1900, there was a young man names John J Leonard living in Patrick and Ellen’s boarding house, but this John was too young to be Kate’s husband.  He might have been a nephew or a cousin.

Unlike Kate’s brothers and brothers-in-law, John was not a teamster.  He was a construction worker who specialized in concrete.  It is unclear when he came to America (Census records give conflicting dates), but he was in San Francisco by 1895.  He had formed an “artificial stone” construction company called Keating, Leonard, and Ransom by 1895, and they operated out of 28 Hawthorne Street.  Among their many projects, they built the 60-room Maria Kipp Orphanage in the Richmond District in 1896-97. 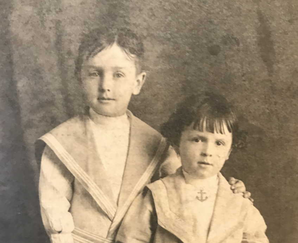 Catherine and John took out a marriage license on December 20, 1899, and married that weekend, most likely at St. Joseph’s Parish.  Soon after they married, Kate and John moved 1358 Folsom Street.  The business moved to 40 Montgomery Street.  Catherine settled into married life and became pregnant by the Fall of 1901.  Unfortunately, their first child, a girl, was stillborn.  Catherine told her granddaughter Lynda years later that, while she loved her sons, she missed having a daughter.   In 1904, they welcomed her second child, a boy that they names John Joseph, Junior.

They were living on Folsom Street in 1906, when the Earthquake and Fire destroyed much of the neighborhood.  Catherine was eight and a half months pregnant with George at the time.  Her granddaughter Lynda remembered Kate saying she saw many women giving birth all over Golden Gate Park in the aftermath of the Fire, but that George was born in a cellar.  Where is unknown for certain, but it is likely to have been at the Moran house.

John and Kate were active in St. Joseph’s Parish and John was a member of The Knights of the Red Branch.  The KRB was an Irish fraternal organization with ties to the Fenian Movement.  There was a four-story KRB Hall which was put up at 7th and Mission Streets after the Earthquake.  According to Jim Carroll’s online post at SFGenealogy.com: 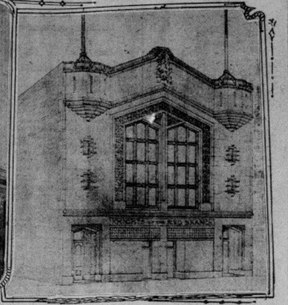 Soon after the 1906 great earthquake and fire, an Irish community center was located at 7th and Mission streets.  Because of its location and the bent of the politicos (that is, the bent arm of some heavy drinkers), it soon became a great gathering place for the mostly Irish.  You could not understand all of the conversations as there were differing Ulster and Cork brogues, and they came from Connaght and Dublin, some came from San Francisco - new first generation Americans.  It was the KRB Hall, or as it was properly known - the Knights of the Red Branch.  It was three or four stories tall, and there was a thriving bar on each of the floors.  The basement was the locus of the Sets.  While it really could not be called ballroom dancing that took place on the second floor, there was time for the Sets, also.  And, sometimes, they even played the "Days of the Kerry Dance."

There was generally at least one fight on most Friday and Saturday nights, but at least you would see the pugilists back there the next weekend--maybe even that same evening--hanging on to each other as they played the Soldier's Song.  The Sets seemed to bring together the disparate groups and soon the people from Dingle were talking to the Dubliners, and the men from Ulster were ogling the girls from Cork. 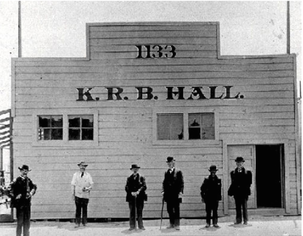 This went on for years until, one day, an inquiring reporter looked into the KRB Hall and its history and found that no one had ever applied for, nor was the Hall granted, a liquor license, let alone an entertainment license for all of the bands that played each weekend.  Even in the free-for-all San Francisco, home of the Barbary Coast, this caused considerable stir—especially when it became known that the elite of San Francisco's fire fighters and policemen regularly gathered there for libations. There were the mayor, the county supervisors, and the whole lot of those folk that made it a mandatory stopping place.  Perhaps it was because the place never closed during Prohibition and it was never in the thought process that they needed to get another license when liquor became legal again.

The old KRB building finally burned down in 2007.  In 1975, decades after the closing of the KRB Hall, the concept became a reality again when The United Irish Cultural Centre was opened on 45th Avenue and Sloat Boulevard, across the street from the Zoo.  Dolores and Kevin Quattrin became charter members.  The UICC has a restaurant, a library, banquet halls, two bars and a large ballroom upstairs for shows, dances, and other large gatherings. 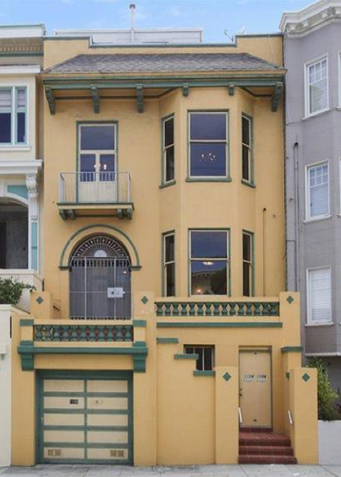 John was probably never involved with Irish rebellion back in Roscommon, but there was no doubt where his sympathies lay.  In 1910, he served as a pallbearer for Thomas Desmond, the retired San Francisco sheriff and Irish patriot.  Desmond had been the representative of the Knights of the Red Branch to join John Breslin in the effort to rescue six political prisoners of the 1875 Fenian Movement.  The prisoners  were broken out of Freemantle Prison in West Australia and escaped to San Francisco on a whaling ship under the American flag.  San Francisco Irish were always supportive of the various Irish rebellions.  In 1916, John was on Archbishop Hanna’s executive committee for Irish Relief during the Easter Rising.

By 1912, the family had moved to 2843 Howard Street, just three blocks away from where they had been living.  In 1913, John’s company won the bid from Archbishop Riordan to build Sacred Heart College.  This campus on Gough and Ellis would later become Sacred Heart Cathedral Prep.  It was a huge boost for the company and the family.  They moved back to Noe Valley and built the duplex at 1158 Dolores Street where they would live for the rest of their lives.  The flats were around the corner from where Kate’s sister Mary lived on Jersey.  The 1920 Census said the house was worth $10,000.  As two flats, it was sold for over $2.45 million in 2014.

John did extremely well for himself and his family.  In 1920, the company received the contract to build St. Joseph’s Church in Alameda.  His older son went to Santa Clara University to become a civil engineer.  The family bought a summer home in Sonoma near where Catherine’s brother Mike and sister Delia had places.  The Coogans also had a place in the area.

In 1931, John closed or sold his contracting business and went to work for JD Christian Engineers.  By 1935, John had retired; he was 67 years old.  He and his son George seem to have been out of work for a year or so, when, in 1936, John was making ends meet by working as a painter.  But, in 1937, he was no longer working.  Kate worked cleaning railroad cars to help with cash flow.  They owned the flats and received rent from the downstairs flat, but times were tight and every penny counted.

During this period, John Junior (aka Jack) took a job with Shell Chemical and moved across the Bay to Pittsburg.  In 1936, he married and moved to Walnut Creek where Kate’s first and only grandchild Lynda was born.  Jack later moved to Torrence and then Long Beach, but they always came back for Christmas.  Kate was very close to her granddaughter and relished those holiday visits.  She even taught Lynda to make the sign of the cross in Gaelic. 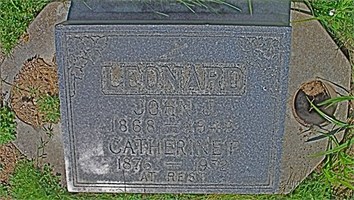 John Leonard, Sr., died on July 1, 1942, at the age of 74.  The cause of death was acute cardiac dilation (enlarged heart).  Kate remained a widow for the next ten years, living in the house on Dolores Street with her son George until her death on October 22, 1952.  She was 77 years old.  Her cause of death was myocardial infarction.  The rosary was held at the old Duggan’s Mortuary on 17th Street and Valencia.  The funeral mass was at St. Paul’s Church.  She and John are buried together in a simple grave in Section V in Holy Cross Cemetery, near her niece and nephew, Joseph and Lucille Conlan.

Kate was remembered by her granddaughter as being jolly and full of life.  She had black hair and bright blue eyes that twinkled when she smiled.  She may have also had a bit of an Irish temper.  When Lynda was a teenager and would slam the doors in a fit of pique, her father would say, “She’s just like my mother!”  Catherine doted on her granddaughter both because she was the only grandchild and because Lynda represented the girl child Catherine had lost.  Catherine had had a long happy life with her loving husband and, in the end, she was reunited with him and with that unnamed daughter she had lost a half-century before.