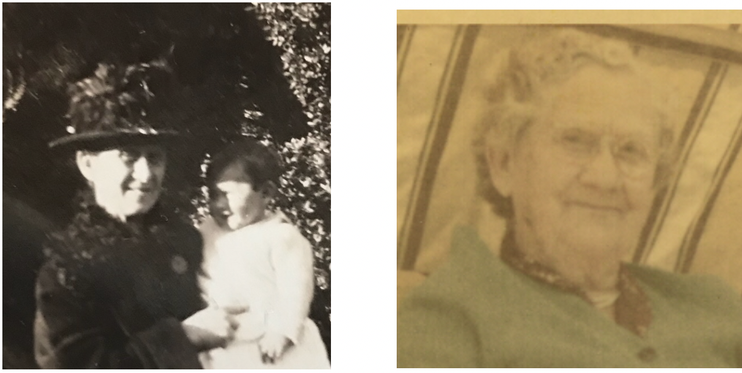 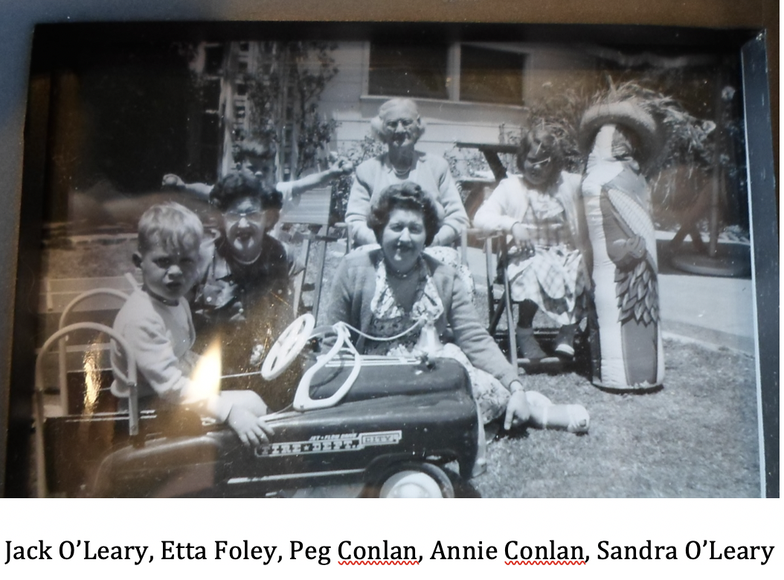 Anne Silk (who always went by Annie) was born on January 12, 1871, in Beech Hill and she was probably baptized at Bullaun Church, but a record was not found.  Annie was 13 when she came to America on the SS Austrian with her mother and siblings.  Like her siblings, she had no formal education but could read and write.

Annie lived with the family in the Mission and Bernal Heights until she met and married Patrick Joseph Conlan.  Patrick was born to Martin Conlan and Mary Considine on March 19, 1866, in Co. Clare.  He had two brothers and a sister.  He immigrated from to San Francisco in 1890 or 1891 and was joined by his siblings later.  Patrick and Annie were married at St. Paul’s Church on April 1, 1893.  They would have eight children together.

Patrick had been a day laborer initially, but, in 1895, he became a teamster for the Oregon Import Company, and the Conlans moved to Natoma Street between First and Second Streets.  This was in St. Patrick’s Parish.  Their first six children were born there.  The South of Market area (SOMA) in the 1860s had been pioneer area with a mix of social classes.  The advent of the cable cars and the new street car lines saw an exodus of the wealthy from Rincon Hill to Nob Hill and, by the time the Conlans moved there, the neighborhood had become a largely working class neighborhood with a large community of newly immigrated Europeans.  On their block were people from Germany, Ireland, Finland, Portugal, Sweden, Norway, Francs, Scotland, Australia and New Zealand.  There were also many sweatshops, factories, power stations and flophouses in the area due to the nearness of the waterfront.

"William Curran, an artist in the employ of Sanborn & Vail, was seriously injured last night in a collision between a Howard-street car and an express wagon in which he was riding.  Patrick Conlan, the driver of the wagon, attempted to cross in front of the car, which struck the rear end of the wagon and precipitated young Curran to the ground with great violence.  He was bruised about the left side of his body and rendered unconscious.  After being restored to consciousness he was removed to the Railroad Hospital."

Curran seems to have recovered and no one was sued over the matter.

The 1906 Earthquake and Fire completely destroyed the area.  Many of the fatalities from the disaster occurred there.   The Conlans were the family members who lived furthest into the zone of destruction, and Annie and her six children—ages 13 to 1 year old—would have had to flee through several miles of destruction and chaos.  The family lived in Golden Gate Park for a time while Patrick worked to clear up the debris.

Following the ‘Quake, the South of Market area was rebuilt with a shift in focus towards the development of light to heavy industry.  The numbered streets and every third cross street (Mission, Howard, Folsom, etc.) were widened to triple their previous size.  Streets like Minna and Natoma where the Silks had lived seem to be alleys now, but all the streets south of Market would have looked like those alleys before the ‘Quake and Fire.  The Conlans returned to SOMA, but they moved further west into St. Joseph’s Parish, living on Langton, near 7th and Harrison.

The family was living nearby at 26 Chesley Street in 1910 when Patrick was admitted in the Stockton State Hospital either.  It is unknown why he was admitted, but he was there for the next six months.   He died on July 15, 1911, after an attack of status epilepticus, a series of seizures of greater duration than five minutes over a 3-day period.  He was only 43 years old, roughly the same age as Annie’s brother Patrick had been when he died.  Annie buried her husband in Section T at Holy Cross Cemetery, near his brother-in-law William Cogan.  The gravestone is gone—if, indeed, there ever was one—and the grave can only be identified by the names on the stones around and behind it.  Annie would remain a widow for the next 43 years.

Patrick had been a member of the United Brotherhood of Teamsters Local 85.  There must have been some sort of insurance or widows and orphans fund to keep them going, since Annie did not take in boarders or seem to enter the work force and the children were too young to start work.

The family was very close knit.  Only two of the children ever married and moved out—Claire in 1917 and Loretta in 1934.  The other six lived with their mother and each other until each passed away.  After Patrick’s death, the family moved across Harrison to 44 Boyd Street where they lived for the next nine years.  The area became so industrialized later that St. Joseph’s Church would close due to lack of parishioners.   In 1920, they moved to St. James’ Parish near Army (now Cesar Chavez) and Guerrero Streets.  They initially lived on San Jose Avenue, then moved around the corner to 55 Duncan and lived there for the next ten years.

Located between Noe Valley, the Mission and the Castro in what became known as the Valencia Corridor, the family saw a huge change in the surrounding neighborhoods over their time there.  To the north, the Castro District changed from a primarily Scandinavian neighborhood to middle class Irish to a largely gay area.  To the east, the Mission District had been populated by Irish and German immigrant workers during the 19th Century, but the population began to change in the 20th.  A large Polish population grew in the 1920s.  During the 1940s, a large number of immigrants from Mexico moved into the area.  They had been displaced from Rincon Hill in order to create the western landing of the Bay Bridge.  This gave the Mission the heavily Latino character for which it continues to be known today.  To the south, Noe Valley changed from working class to middle class to more affluent and less diverse over the years. 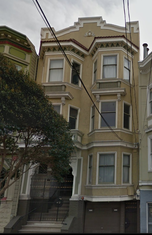 Annie was open and loving, especially with children.  In 1923, she took in a foster child named Consuelo Cabezud.  Consuelo, who was known as Connie most of her life, had been born in San Francisco to Joacuin and Rosario Cabezud from Jalisco, Mexico.  But Rosario died of tuberculosis in March, and Connie’s father placed her in an orphanage.  As Aunt Lillian told the story to Connie’s daughter Sandy O’Leary, she and Annie had gone to the orphanage to foster a teenage girl who could be a domestic for the house, as there were nine Conlans living there and all were working.  But when Annie saw this beautiful, blue-eyed child, she could not leave her there.  Knowing her mother had died of TB might have influenced Annie, since her daughter Lucy was already ill with TB and would die in 1937.  In Lucille’s obituary, Consuelo’s last name is given as Conlan, but the 1940 US Census gave her name as Cabezud still and named her relationship to Annie as “ward.”  Annie fostered Connie but never adopted her.  It is very possible that the Conlans already knew the Cabezuds before Rosario died.  Both families lived in Mission Dolores Parish, and some of the Conlan children were the same age as Connie’s siblings.  There were Cabezuts (different spelling, but related) living a block up 19th Street.  Annie’s daughter Peg was even one of the witnesses for Connie’s father’s naturalization in 1933.  Connie later married a man named Mervyn O’Leary and had four children—Sandy, Jack, Maria, and Jaime.  Connie stayed in the neighborhood, living at 333 San Jose Avenue, and helped care for Lillian, Walter, and Jim later in their lives.  Because of the age difference (almost 30 years between herself and Lillian), Connie always called her Aunt Lily, despite being her foster-sister. 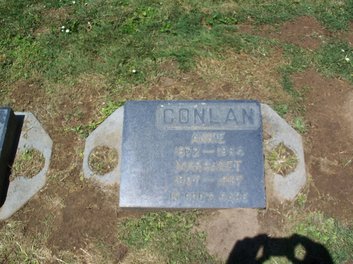 The loss of her husband was hardly the last loss Annie would experience over her long life.  In 1918, just one day after the birth of her first grandchild, Annie lost her daughter Claire to the new influenza that hit the City.  In 1937, she would lose her daughter Lucille to tuberculosis.  In 1940, her youngest daughter Loretta also contracted tuberculosis.  Though Loretta would recover over the next five years and live a long life, it must have been a harrowing time for Annie to relive the loss of two other daughters.  In the midst of that ordeal, her oldest son Joe dropped dead of a heart attack.  She also witnessed the deaths of all but one of her siblings.  But Annie continued on, providing a point of stability and hope for the family that remained.

Annie’s grandson Richard Foley remembered taking the train up to the City in the 1950s and climbing the stair at the flat to visit Annie and his mother Loretta’s siblings.  He said Annie drove his mother crazy by spoiling him rotten, as grandmothers are supposed to do.  She was a gentle and kind person, but she also had a passion for boxing.  The family had a big black-and-white TV in the living room around which they would all sit for Wednesday or Friday or Saturday Night Fights, and the only house rule was no one was allowed to talk while Grandma was watching the bouts.   This was the heyday of Rocky Marciano and Sugar Ray Robinson, but Rich remembered Annie liking up-and-comers Floyd Pattterson and Gene Fullmer.  Unfortunately, she would not live to see Patterson beat Archie Moore for the Heavy Weight Championship in 1956 nor to see Fullmer beat Leonard for the Middle Weight title in 1957.

On August 11, 1954, Annie died from stomach cancer.  She was 83 years old.  Visitation occurred at Comisky-Roche mortuary, followed by a high requiem mass at Mission Dolores Basilica and burial at Holy Cross in Colma.  When her husband had died, she had not bought a family plot in Holy Cross like her brothers had, most likely because of the cost.  The other grave in Patrick’s plot had been intended for her but, when their daughter Claire died in 1918, she took Annie’s spot.  The family had to buy a new plot in Section V.  Though they stayed together through their lives, the Conlan family ended up scattered around Holy Cross Cemetery.  In 1937, Lucille passed away, and, in 1941, it was Joseph’s turn.  They were buried together in Section U.   Margaret would join Annie in Section V in 1967.  Walter and James would end up together in Section L2 and Lillian would be in the grave next to them.

Annie was one strong lady.  She raised eight children and took on fostering a ninth.  She survived the loss of three adult children, and the near loss of a fourth.  She lost her husband and remained a widow for 45 years.  She lived through the Great Earthquake and Fire, the Great Depression, and two World Wars.  At 83 years old, she outlived all but one of her siblings.  Her faith and her family (and boxing) provided support to her through it all. 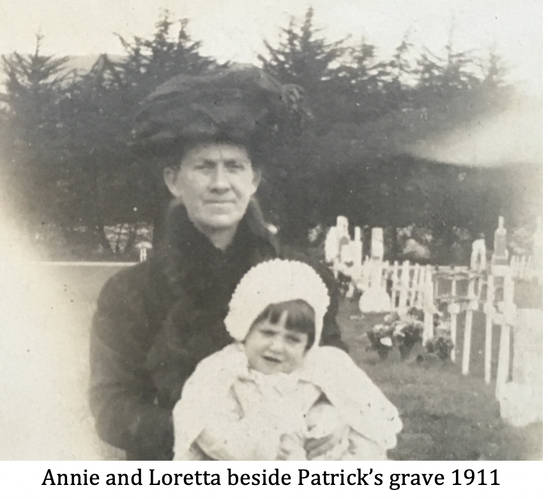